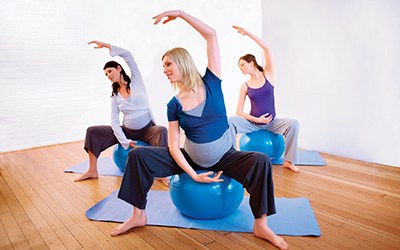 Love exercise but unsure if you should continue now you’re expecting? Find out how it can help you have a happier, calmer pregnancy

MEET THE EXPERT
Professor Sophie Scott is a neuroscientist at the Institute of Cognitive Neuroscience at University College London. She’s a mum-of-one and a regular runner.

Exercising helps you feel happier, stronger, less stressed and calmer, but despite all of these benef ts, doing it while you’re pregnant can raise a few eyebrows for all the wrong reasons. According to new research from Sport England’s This Girl Can campaign, many of us are hanging up our trainers when we become pregnant, despite loving our pre-pregnancy exercise routines. Almost a third of mums-to-be worry about whether exercise is safe when they’re expecting, 24 per cent aren’t sure about what they can and can’t do, and at what intensity, and three per cent have even been advised by a friend or family member not to continue.

KEEPING UP THE CARDIO
If you regularly ran, swam, cycled, walked, danced or went to the gym or classes before you became pregnant, it’s safe to continue as long as you’re comfortable and don’t push yourself too hard. It’s worth discussing your exercise routine with your midwife, and tell your instructor at the your gym or class how far along you are, so she can advise on how to proceed. Carrying on with cardio is great for increasing energy levels, improving sleep, and boosting blood flow, meaning less chance of leg cramps and varicose veins.

But are we missing a trick? “Exercise is amazing for you, your baby, your brain and your mood,” says neuroscientist Sophie Scott. ‘It can really help you feel better and healthier during your pregnancy. Your brain is dependent on your cardiovascular system, so the fitter you are, the better it will work. Exercise helps the development of new brain cells, which regulates your mood and speeds up the circulation of endorphins to your brain.

“These act as your body’s natural painkillers and when you exercise they’re released primarily to help ease your aching muscles. They are chemically similar to morphine, so as well as having a physical pain-killing response, they also have a positive, calming effect on your brain. That’s why, after exercising, you might feel an exercise buzz or high. The  interesting thing is that during pregnancy, you’re already on an endorphin kick as they are switched on to ease the physical changes, such as the extra pressure on your joints and looser ligaments. So if you are active while you’re pregnant, you get twice as many endorphins as usual: as not only are they in overdrive in response to your pregnancy, they will also kick in when you exercise, giving you that extra happiness boost and helping you relax.” Exercise doesn’t have to be strenuous to be beneficial, so even if you reduce the intensity, you’ll still be generating endorphins. In fact, it’s much better to lower the intensity, such as switching from running to brisk walking, than it is to stop altogether. While it’s not dangerous to you or your baby to suddenly stop exercising, you might discover that you feel less energised or slightly lower in spirits than usual as a result. “When you exercise regularly, your body gets used to receiving a certain level of endorphins,” says Sophie. “So if you don’t exercise for a while, it can cause a drop in your mood. As long as it’s safe, don’t suddenly stop all activity, and try to keep on exercising, even if you do gradually reduce the frequency and intensity, as it will help your body gently adjust. Exercise can also help you feel more confident  as your shape changes during pregnancy. You’re going through a lot of physical and hormonal changes, so keeping that flow of extra endorphins to your brain can help you feel strong and in control. And while endorphins don’t directly influence confidence levels, feeling more positive, more energised and happier will go a long way to giving your self-esteem a much-deserved boost.” 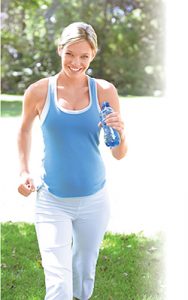 So with all these feel-good benefits, there’s even more reason to continue to exercise throughout your pregnancy, especially if it’s part of your normal routine. And if you’re in any doubt about exercising while you’re pregnant, take inspiration from the This Girl Can campaign (thisgirlcan.co.uk). It shows how normal it is to be active while pregnant, as well as celebrating women exercising in a way that suits them. It also tackles a key reason why many pregnant women discontinue their exercise routines —a fear of judgement from others. Unfortunately, even though exercising while pregnant is one of the healthiest habits to continue and should be encouraged and supported, it can still attract unfavourable comments. The good news is that there is now a more positive attitude to women continuing to exercise. However, 13 per cent have been questioned, criticised or received negative comments about it. “Exercise is such an amazing thing to continue while you’re pregnant, so it’s such a shame that there are still some people who give out advice to the contrary, no matter how well meaning they might intend it to be,” says Sophie. “Providing it’s safe and healthy for you to do so, exercise is on one the best things you can do to look after yourself during pregnancy, so if anyone does comment or question you on your exercise habits, just ignore them! You know it’s doing you and your baby the world of good: you’ll feel happier, healthier and stronger. What’s more, you know your body better than any stranger does, or even your friends and family. Other people’s opinions are the last thing you need to worry about at this amazing, joyful time in your life, so don’t feel that you can’t put your trainers or your yoga maternity-pants on and go for it!”

CHOOSE WISELY
If you regularly ran, swam, continue while you’re expecting, but a few should be put on hold. Contact sports and any activity where your bump could be hit, such  as hockey and netball, are best avoided. Scuba diving should be avoided too, due to pressure changes, as should any activity in extreme heat, such as Bikram yoga. Exercise where you lie on your back for long periods should be given a miss and be wary of any exercise where there’s a risk of falling, such as horse riding.