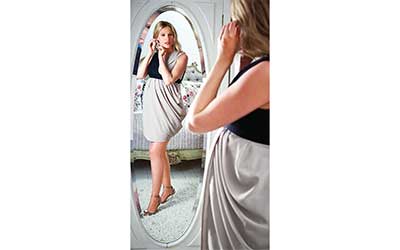 So you might not be overdoing the mojitos this year, but there are lots of clever ways to have a good time, with no hangover either

LBDs, doing a smoky eye in the office loos and drinking until 3am, we’re all well-versed on the party season. Except the minute you’re pregnant (never mind once you’ve got a newborn), it’sa whole new ball game. A recent study showed that it takes an average of 18 months for a new mum to feel ‘herself again’—so enjoying a night out might be tricky. How do you face the social whirl when you’re exhausted and know you’ll be up four times in the night, either for a wee or your wee one?

Pregnant in the festive season
Being a social butterfly with a baby on board isn’t easy. You can’t drink and your feet are swollen so you can’t wear your killer heels. But, within reason, it can be good to get out and socialise, says Dr Susan Turner, mother of six. “Seeing other people is good for your mental health,” she says. Pregnancy is an all-consuming time and it can be hard to remember there’s a world still going on out there. “Meeting with friends is a reminder you’re part of it,” says Susan. And although it might feel like an effort to drag yourself out, you might have a great time. Mum-of-two Rebecca Maberly,  who runs advice website doctoranddaughter.co.uk, says, “If you are going to a house party, take a drink you can have with you—there’s nothing worse than drinking tap water all night. Buy or make a fruit-based alcohol-free cocktail that feels like a treat.”

And you can enjoy more party foods than you might think. Soft blue-veined cheeses, such as Roquefort, are not safe to eat in pregnancy, but hard ones, like Stilton, are less likely to contain listeria, meaning the NHS says it’s fine to eat them. “Prawns, smoked salmon and even sushi are fine, as long as the fish has been frozen first, to kill parasites, or it’s cured,” says Rebecca. “But avoid pâté.” Whether made from meat, fish or veg, pâtécan contain higher levels of listeria bacteria than other foods.

Fashion editor Erica Davies, mum to Charlie, four, and Lila, two, and founder of the MMM blog, says there is no a reason to shy away from fashion and you can even try party looks you might usually avoid. “Bodycon, for example, is lovely when pregnant,” says Erica. “Choose a statement necklace or chandelier earrings, so all eyes are on that glowing skin!”

‘FAKE IT TILL YOU MAKE IT’ PARTY HACKS TAKE SPARE SHOES
Rebecca says, “Head to the party in your heels, then slip into comfy shoes when your feet start to ache. Comfortable shoes are a must—swollen ankles don’t look or feel good and standing for hours in heels will not help.”

TEST YOUR BREAST PUMP BEFORE YOU NEED IT
If you’re planning to have a few alcoholic drinks and want to express some milk to skip a feed with your baby, it pays to make sure you are comfortable with your breast pump first.

SPARKLING IDEA
Mix elderflower cordial with sparkling water, served in a champagne flute. It feels much more chic than wandering round the party with a tumbler or pint glass. 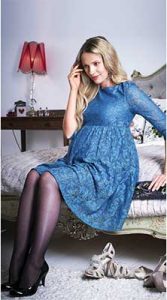 Jo Reid, make-up artist, director of Blush (blush.uk.com) and mum to Maggie, three, also says  make the most of your pregnancy glow. “Pregnant skin often feels smoother and more plumped up, so show it off by only using cover where it’s needed,” she says. “Pregnant skin can be prone to melasma (dark spots), so a good concealer is a must. MAC do the best full-coverage concealers for small areas.” And try Benefit Tints under your base to boost colour on the apples of your cheeks.

With all this, you might look like the life and soul of the party, but Rebecca says, “Don’t feel you have to stay until the end. People understand that pregnant women get tired. Of course, if you want to hit the dancefloor, go for it—it might be a while before you get the chance again.”

Festive season as a new mum
You’ve hardly drunk for a year, you’re not sure your mum wardrobe is up to much and you haven’t slept for longer than three hours in a row since the birth. Yep, facing the festive season with a newborn can be a challenge.

Last Christmas, full-time mother Victoria Turner’s baby, Miles, was just two months. “I held a gathering, as I thought it would be a lovely way to see everyone. I was nursing a pint of water with a baby attached to me, while my friends got merry on mulled cider. I was miserable that I couldn’t join in. If I were doing it again I’d host a pot-luck lunch— everyone brings a different course and the drinks don’t flow quite so much as it’s earlier in the day and the focus is on the food.”

Dina Maktabi, founder of kensingtonmums.co.uk, says, if you’re hosting a party at home, little details count. “Try dipping marshmallows in chocolate,” she says. “Toddlers will love that.” She also suggests traditional games, like charades. ‘Little ones love seeing adults being silly, even tiny babies will love the excitement.’

Molly Clark, 34, from London, mum to Oren, now one, wanted to make a friend’s Christmas do when Oren was three months. “I took my breast-pump, to use in the loo,” she says. “When I felt my boobs getting fuller, I went to the loo, but found a massive queue. When a cubicle was finally free, I sat there as the pump made a weird squelchy, cow-beingmilked sound, with drunk women shouting for me to hurry up.” Not an episode to make you feel like a glam party girl!

So, how can you best enjoy a rare night out as a new mum?

Erica says, “A great outfit starts with comfortable underwear. Pick a great nursing bra that ramps up the sex appeal—yes, they do exist.” If you’re taking your baby, she says, ‘There are labels that offer fantastic dresses with side draping and subtle detailing, making feeding your baby easy.

Sarah Beeson MBE, co-author of The New Arrival advises building up to the big night—leaving your baby for the first time can be difficult for you both. “Start by leaving your little one with the person who will be caring for them for 30 minutes. Then try an hour. A few days, before your event, leave your baby for a few hours. You can use the time for a festive indulgence—get your hair done, so you’re feeling confi dent.”|MB