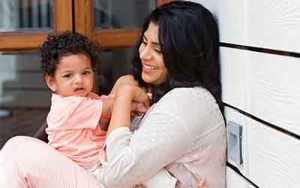 For Marathi film, television and theatre personality, Aditi Sarangdhar, life in the limelight got a lot more exciting after the birth of her baby boy, Arin

Hollywood superstar, Kate Winslet, once famously said, “Having children just puts the whole world into perspective. Everything else just disappears.” Closer home, our very own green-eyed goddess, Aishwarya Rai Bachchan, is noted to have said, “I don’t know about changing my perspective because motherhood is such a glorious blessing and I am very thankful for that. It’s such a beautiful experience. I so strongly recommend it. It’s bliss, love, and fulfi llment of another level.” There’s no doubt that the life you’ve come to know drastically changes when you bring a child into the equation, and for Aditi Sarangdhar, it was no different. “I have been part of the Marathi film industry, television and theatre scene for the past thirteen years. As an actress, it has been a great journey. But, nothing compares to the adventure life has been after Arin came into this world,” she says. 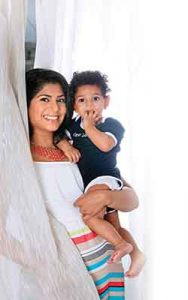 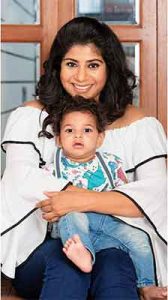 The baby way
“My husband Suhas Revandekar and I fell in love and later married. We’ve been married for almost five years now. Ever since we thought of tying the knot, Suhas was keen on starting a family. But, we did want to spend some time together before we decided to make a baby. It was after four years of marriage that we both felt it was time, and the planning soon began,” says Aditi. The couple were a little sceptical about their chances of conceiving since Aditi was now 35, and Suhas was 43, and were repeatedly told that they would encounter some difficulties while trying to get pregnant. Fortunately, life had a wonderful surprise and the couple were
successful almost immediately.

“We were lucky that we didn’t need to consult any fertlilty experts, and we conceived naturally. Before I realised that I might be pregnant, Suhas and I were vacationing in Australia. We’re bit of adventure junkies so I was scuba diving, skydiving, bunjee jumping, the works!” she recalls, excitedly. The couple always wanted to start a family, and their trip to Australia was indeed fruitful. Once back, though, the couple were back to the grind and went about their days as normal. “After we returned home, we got back to our routine— I started my shows, shooting, meetings, events, getting up early in the morning, hitting the gym—it was work work, work as usual,” she says. Then one day, it all changed. “I suddenly began feeling an intense wave of nausea and was throwing up continually. That’s when I realised I had missed my period, and took a home pregnancy test to confi rm my suspicions. When the test showed positive, I shared the news with Suhas and we were over the moon! This was perhaps one of the few times I’ve seen him this elated,” she says, with a big smile on her face.

Pregnancy symptoms
While the couple couldn’t be happier to share the news with their family and friends, as well as be pregnancy buddies with her younger sister, who was also expecting her first baby, Aditi did have a rough fi rst trimester when it came to the symptoms. “Despite being a reatively smooth pregnancy, I experienced a surge in pregnancy hormones that manifested in nausea, irritation, mood swings and a whole lot of drama,” she says. Quite befitting for an actress, we think! Unfortunately, this meant that Aditi frequently threw up, experienced a lot of food aversions and couldn’t really eat what she wanted to. “I couldn’t eat anything except for salads and fruits for days at a stretch,” she says. This also meant that she couldn’t really brush her teeth properly as the very action caused her to throw up, resulting in tooth decay. “But apart from the nausea and morning sickness, pregnancy was quite a joyful experience for me,” says Aditi.