From physical attributes to personality traits, you don’t have to wait to see how your baby will turn out. Get a glimpse into her future right now!

ZERO TO SIX MONTHS
● From the moment she’s born, your gorgeous baby’s main form of communication is crying. She’ll have a different cry to match each specific need, whether she’s hungry, cold, bored, or just wants a cuddle. Distinguishing which cry means what is a skill every new mum has to learn, so don’t worry if takes you a little while to catch on.
● By six months, your baby will be making her first attempts at talking to you. She’ll start by making cooing sounds, and ‘ooooos’ and ‘aaaaahs’, even ‘babababa’. You can help with her speech development by constantly chatting to her, even if it’s just a running commentary on what you’re doing. She’ll love to hear your voice, although she won’t have a clue what you’re talking about! 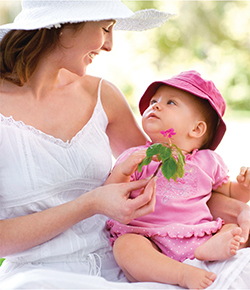 SIX TO 12 MONTHS
● Even though it’s still too early for her to be saying words, the sounds she makes now become much more tuneful as she tries to imitate your voice. She’ll increasingly start to ‘answer’ you back when you talk to her.
● Encourage her to make even more sounds by copying her babbling replies. This teaches her about two-way communication and could make for some interesting conversations!
● Another way to help her understand the meanings of words is by using gestures and actions, such as waving when you say ‘bye-bye’, or pointing to her cup as you say ‘drink’.
● Around now she’ll also gain more control over her muscles and will start reaching out with both arms to tell you she wants to be picked up for a cuddle. She’ll also start to laugh around now, a sound you’re guaranteed to want to bottle so you can keep forever! 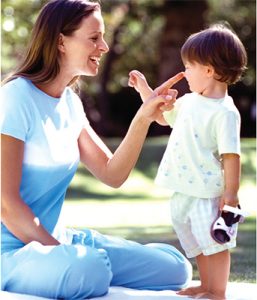 12 TO 18 MONTHS
● Expect to hear her first meaningful word as she hits her first birthday. Most babies first words tend to be ‘Dada’, as this is easier for her to pronounce, so don’t take offence. Or it may even be a random word like ‘shoe’! Whatever it is, it’s an important milestone for her, so be sure to give her lots of praise.
● Once she’s a year old, she’ll also begin to understand what you’re saying to her. Some babies even start to use two or three words with their own meaning now. Even if the word doesn’t match the object she’s referring to, if she uses it consistently for that object, it shows she understands the meaning.
● By 18 months, most little ones are able to use around 20 different words (although they may be completely unintelligible to anyone but immediate family!), but she won’t yet be forming a sentence.
● Girls tend to be more chatty than little lads (that shouldn’t come as a shock—it lasts until adulthood!), so don’t be surprised if she even starts singing along to nursery rhymes now. (Little Peter Rabbit is a great rhyme to sing as it involves actions, which connect to the language and helps build her understanding and memory). Some babies with older siblings can be a little slower to talk, so don’t worry if that’s the case. They often find it hard to get a word in with older brothers and sisters pitching in. 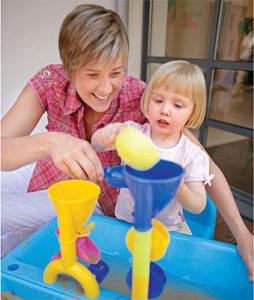 18 MONTHS+
● Expect her to start putting two or three words together to make a constructive sentence now, such as ‘Daddy come home’.
● Help her expand single words into short sentences by adding words, so if she asks for ‘juice’, you can add, ‘juice, please’ or ‘more juice’.
● Use objects and gestures to help her understand instructions and questions. It’s also good to offer her alternatives, such as ‘Do you want teddy or the car?’
● By the age of two, your child should have a collection of about 200 different words. If she still hasn’t started speaking by now, it’s worth visiting your paediatrician to check there are no physical problems, such as deafness, or glue ear.
● It’s important to remember that no two babies are the same, and your tot will develop at a different rate from the next one, so don’t stress out comparing her to others |MB